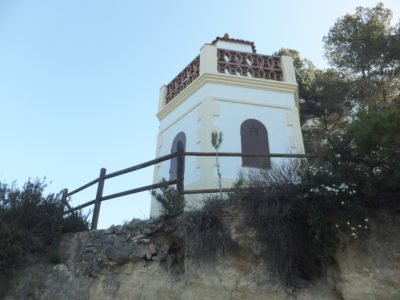 You can find it at:

Espiells is a neighborhood on the outskirts of Sant Sadurní d'Anoia. According to toponymic studies its name comes from the Latin word 'specula', which means 'watchtower'. The magnificent view of the Penedès plain that can be glimpsed from the 'miranda' fully justifies its name.

La Miranda d'Espiells is a watchtower with Noucentiste-style elements built in 1927. After the Civil War the building was left without use and suffered a progressive deterioration. In 2004 La Miranda was rehabilitated by the City Council and the Forest Defense Group of Sant Sadurní, with the collaboration of the Juvé & Camps wineries and the Mina y Aguas de la Salud Community, to give it a social and environmental functionality. It currently houses a recreation area and is used as a watchtower for the prevention and extinction of forest fires.

The place that La Miranda occupies today has a long history of human occupation. Under this land lie the archaeological remains of an old funerary space dating from between the 5th and 8th centuries. Specifically, up to 18 tombs have been discovered, 15 of which were the object of an archaeological survey in 1988. Inside the tombs, bone remains and ceramic fragments were found in poor condition.