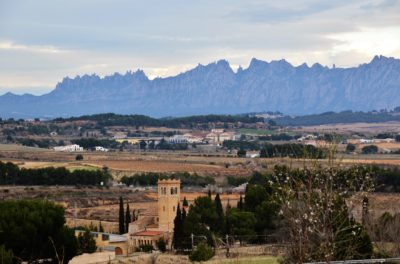 You can find it at:

The first temple dates from 1053. In the baroque period, it has been added some more elements, like the bell wall. It had been built also the dean house, which it was pulled down in 1995. The last remain from the old church is the baptismal font, that it’s preserved into the baptistery nowadays.

In 1895 during a pastoral visit is documented the moment when was appear the decline of the structure. But it was even 1915 when it had been taken the decision to tear down the temple. From that year started the works to build the new church. This was an artwork of Enric Sagnier, Barcelona’s architect, and thanks of the patronage of the Count of Lavern, Pere Guerau Maristany i Oliver.

In the summer of 1936, the church was burnt and looted. Because of this, it was needed to restore the temple from 1942. The restoration went on even 1958, when the fresco of the baptistery was finished. Moreover in 1987 was performed for the first time the works of recuperation of the bell tower and choir from its destruction of the lightning bolt three years ago.